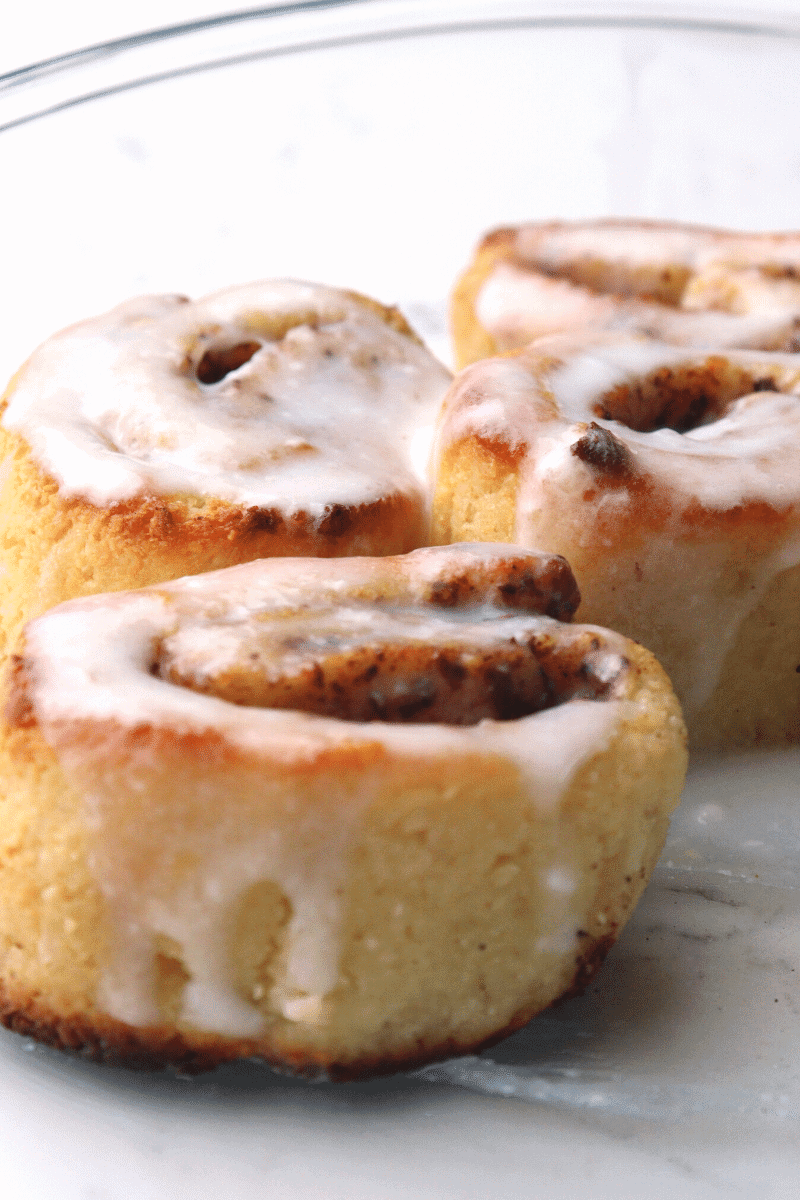 Who’s up for some buttery cinnamon rolls? Talking about comforting food, nothing tastes like home, like these rolls of pure cinnamony bliss.

Did you know that although cinnamon rolls are ever-trendy, they go back to ancient times? All the way back to the Roman Empire! It was the Swedish, though, who centuries later made cinnamon a staple ingredient in their pastries, and they’re probably behind cinnamon rolls as we know them today.

The thing with cinnamon rolls is that they’re also one of the sweetest baking treats, and that’s a problem if you’re trying to stay clear from carbs.

To make carb-free cinnamon rolls, you must revamp the entire recipe, starting with getting rid of an essential ingredient — wheat flour.

The good news is that we’ve found in flour alternatives the solution to all our problems, in this case, finely ground almond flour.

Then we must substitute all the sugar in the cinnamon filling and in that sticky glaze we all love. That’s also easy, thanks to the wide variety of zero-cal sweeteners we have at our disposal.

There’s only one real problem. Without wheat flour, we have no gluten, so the dough is not very elastic, and it’s hard to roll! The solution is using cupcake or muffin tins to hold the cinnamon rolls in place. Here’s how you do it.

To make our cinnamon rolls, we’re using almond flour and a few everyday ingredients — milk, butter, an egg, salt and instant yeast. Then we need our sweetener, in this case, Stevia. You’ll also need a teaspoon of xanthan gum, which will give our bready dough elasticity.

To make the cinnamon filling, we’ll use a combination of ground cinnamon and allulose, a sugar substitute that’s 70% as sweet as sugar and that browns nicely. This is the perfect cinnamon roll mixture.

Finally, we have our cinnamon roll glaze. This one comes together by mixing melted butter, vanilla extract, milk and erythritol, my favorite substitute for powdered sugar.

Here’s basically what we’re going to do step by step. You’ll find the detailed recipe below.

Warm milk is the start of it all. In it, we’ll melt some butter, and we’ll use it to hydrate the yeast.

The dry ingredients always go in another mixing bowl, in this case, the almond flour and the Stevia.

Dry and wet ingredients come together in the stand mixer, where you can control how fast or slow you add the different elements. The egg and the xanthan gum, which are binding agents, play their part at this stage.

At this point, we’ll have our bread dough. Since we’re not using ordinary flour, expect a more compact and less bubbly dough, but that’s okay.

After letting the dough rise a little, it’s time to roll it down. Remember, we’re making cinnamon rolls, so we need to have a dough we can roll!

Here’s where the first layer of flavor comes in. The cinnamon and allulose layer will end tightly tucked inside the bun. You must first dissolve the allulose in water, but it’s pretty easy.

As you roll the buns, you’ll be happy you added the xanthan gum. Once rolled, each cinnamon roll will get its own muffin tin. The muffin tray will prevent the individual rolls from unbinding.

Can you use a baking tray and tuck your rolls instead? Of course, you can, but they must be nice and tight, or they will fall apart.

Finally, there’s the baking, which is the perfect time to combine the glaze. Drizzle it over the buns, and you’re all set. Perfect cinnamon rolls every time.

How to Serve Cinnamon Rolls?

If you go the traditional way and use a baking tray, you can present table-center and serve everyone a roll. These might be crumbly, so I recommend baking them in individual muffin tins. That way, everyone gets his cinnamon roll mess-free.

Serve the rolls with a scoop of creamy keto vanilla ice cream and feel the warmth of home in every bite!

For the cinnamon rolls:

In a saucepan over medium flame, heat the milk and add half the butter (1/4 cup), stirring occasionally. We want it just steamy, so don't let it boil. Remove from heat and set aside.

Meanwhile, use a mixing bowl to combine the almond flour and the Stevia. Reserve.

In your stand mixer bowl, add the milk and stir in the instant yeast. Let it rest 3-5 minutes and stir in the flour mixture while mixing and the egg. Add the xanthan gum and salt. You should end with a relatively elastic uniform dough.

Remove the dough, form a ball, and let it rest for ten minutes in a mixing bowl. Cover it with a kitchen cloth.

While the dough rises, combine the allulose, water and cinnamon in a small bowl. Set aside.

Allow the remaining 1/4 cup of butter to soften at room temperature.

Flour a clean surface and transfer the dough. With a rolling pin, roll the dough thinly, forming a rectangle. You can cut the excess dough to create a uniform shape.

Brush the softened butter across the surface and sprinkle the allulose-cinnamon water mixture evenly.

Cut the dough into 9-12 even rectangles. You can use a knife or a pizza cutter.

Carefully roll the rectangles into their final cinnamon roll shape and place each in a muffin tray. Set aside.

Bake for 20-24 minutes in the center of the oven until puffy and golden.

Meanwhile, prepare the glazing by mixing the butter, vanilla extract, erythritol and milk.

Carefully remove the muffin tray from the oven and allow the rolls to cool
before unmolding them and drizzling them with the glaze. Enjoy!